The Famous Swoosh: How the Iconic Nike Logo Got Its Start

Today, the Swoosh stands alone. But would you believe the iconic logo began as a $35 graphic design project? 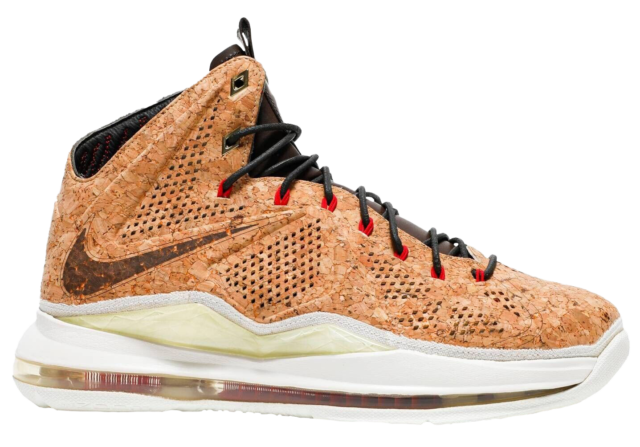 How the Nike Swoosh Became a Global Phenomenon

The Nike Swoosh is arguably one of the most iconic logos of all time. Recognizable across the world, the energized Nike logo was created in 1971 by a young design student looking for extra money to pay for oil painting classes. The craziest part of the story is that she was paid just $35 for the creation. Fortunately, the designer was eventually rewarded with enough Nike stock to more than make up for that paltry fee. And she gets bragging rights as the designer of one of the most impactful brand logos of all time.

How the Nike Swoosh came about speaks to the bootstrap beginnings of the global brand. Before Nike became Nike, it was called Blue Ribbon Sports, founded in 1964 by University of Oregon Hall of Fame track-and-field coach Bill Bowerman and his former student and track athlete, Phil Knight. Together, the two launched what would become the biggest brand in sports history while working day jobs. Bowerman focused on innovative new shoe designs while Knight sold the shoes out of the trunk of his car.

Bowerman and Knight first dipped their toes into footwear by importing Onitsuka Tiger sneakers (now part of Asics) from Japan in the mid-60s and selling them in the United States. Bowerman also began designing running sneakers that Onitsuka manufactured. He was obsessed with reducing the weight of sneakers to improve an athlete's performance.

Bowerman famously experimented by pouring rubber into his wife's waffle iron to create the waffle sole. This innovation removed weight from the running outsole while adding flexibility. This shoe solidified the company's evolution from distributing Japanese shoes to manufacturing their own. Blue Ribbon created 12 pairs for track and field athletes to wear at the 1972 US Olympic Trials. Nicknamed the "Moon Shoe," an unworn pair was auctioned off for a record-breaking $437,500 in 2019.)

As the company transitioned into manufacturing in the early 1970s, it needed a new brand name for its line of shoes. An employee came up with Nike, after the Greek goddess of victory. The new logo soon appeared on its first shoe, a soccer cleat.

As their sales and reputation grew, Blue Ribbon Sports officially changed their name to Nike, Inc. in 1978. The company went public in 1980.

Who Designed the Nike Logo?

Carolyn Davidson was a design student at Portland State University. Nike co-founder Phil Knight, who taught at the school, hired the young student to take a crack at designing a suitable logo for his brand.

Davidson presented Knight with various options, with the checkmark and Nike spelled out in script being the favorite. Knight initially didn't love the design, but the Nike Swoosh logo eventually grew on him.

The Nike Swoosh logo was officially registered on June 18, 1971, and would become one of the most recognizable logos of all time. Knight hired Davidson as Nike's in-house designer and gave her shares in the company when it went public.

Nike's Evolution of the Swoosh 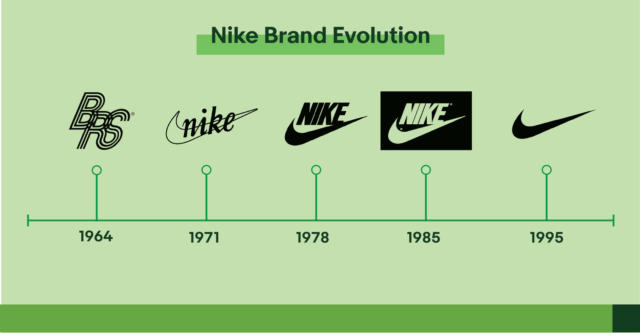 The overall shape and dynamic feel of the iconic Nike symbol have remained constant since the logo's inception, with a few notable variations. In its early years, the Swoosh was accompanied by the word "Nike" spelled in lowercase italics. The colors were predominantly dark navy.

In 1978, the logo got a makeover, with "Nike" appearing in a bold, uppercase font, positioned above the Swoosh. The change was instituted by John Brown & Partners, the advertising agency overseeing Nike's marketing at the time. The "K" in Nike was slanted slightly to make the word more visible, and the points of the Swoosh were sharpened to create a more geometric shape.

In 1985, the Swoosh's color changed to warm red/dark orange, signifying energy and passion. That year also marked the beginning of the iconic "Just Do It" slogan. By 1995, Nike's worldwide recognition had become so solidified that the company removed the lettering from the logo in favor of the iconic, standalone Swoosh.

Rise of the Reverse Swoosh

The geometric shape of the Nike Swoosh has pretty much stayed the same on Nike shoes throughout the company's history. Still, certain collaborators have taken liberty with the logo. A handful of collectible sneakers have employed a reverse, or backward, Swoosh design. 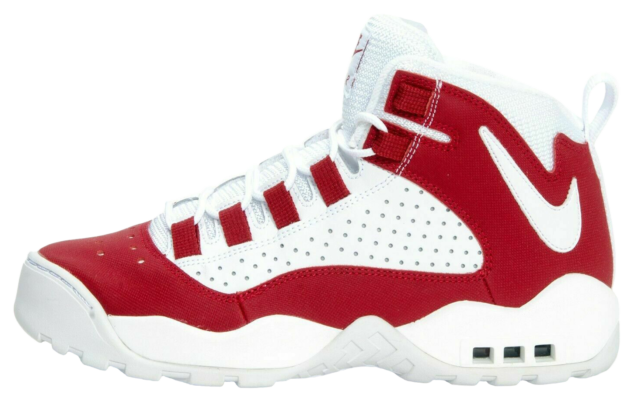 In 2012, LeBron James' tenth signature sneaker, the Nike LeBron 10, featured a reverse Nike Swoosh on the upper. One of the more collectible colorways of this sneaker is "Cork" (EXT 580890-200), which celebrated James' NBA championship with the Miami Heat.

Another signature Nike athlete to have a reverse Nike Swoosh on his product line was Kobe Bryant. The basketball Hall of Famer's team sneaker Nike Kobe AD NXT from 2017 featured a backward logo on the midsole. 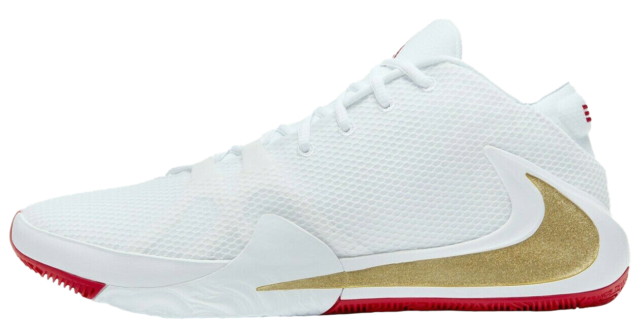 Milwaukee Bucks' Giannis Antetokounmpo's debut signature sneaker, the Zoom Freak 1, used a reverse Nike Swoosh logo as part of its cushioning system. The backward logo acted as a storytelling tool to drive home the narrative that the sneaker was unusual because it was made for the "Greek Freak". 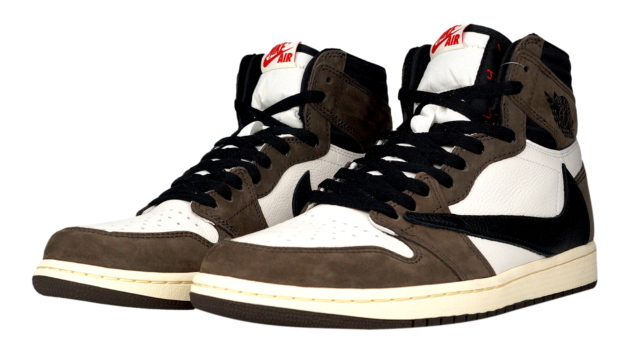 Rapper Travis Scott has created some of the most hyped, highly valued and collectible sneakers for Nike by flipping its iconic logo. The Travis Scott x Air Jordan 1 in high-top (CD4487-100) and low-top (CQ4277-001) versions brought a reverse logo to the Air Jordan 1 for the first time. Resale value for these sneakers can range up to $2,000, depending on model, size and condition. A triple collab version of the shoe with Fragment Design (DM7866-140) is also highly sought-after on the secondary market.

Travis Scott also created the Nike Air Force 1 Low in 2017. While this sneaker didn't feature a reverse Swoosh, it included removable Swooshes that could be attached or detached via Velcro on the canvas upper. The shoes also came with various Nike Swoosh logos. The Travis Scott x Nike Air Force 1 was released in two colorways: White (AQ4211-100) and Sail (AQ4211-101). Resale value for these sneakers can reach four digits, depending on size, colorway and condition.

Collaborative partners have also employed the use of an upside-down Swoosh. In 2018, Slam Jam created two Nike Blazer 77 colorways that flipped the Swoosh branding on the medial side. The Slam Jam x Nike Blazer 77 "Class of 1977" was released in two colorways: White (CD8233-100) and Black (CD8233-001). Resale value for this sneaker can range up to $500, depending on size, colorway and condition. 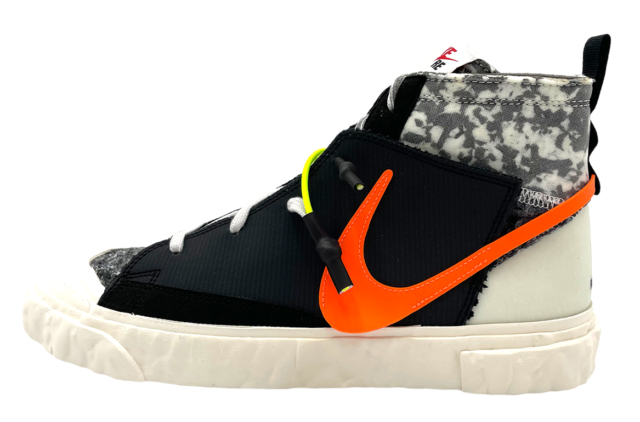 Collaborators have also played with the proportions of the marking on their footwear. Japanese brand READYMADE collaborated on two Nike Blazers with Swooshes similar to Davidson's original Nike logo sketch. The Swoosh was half-stitched onto the shoe and had a more pronounced curve and thinner points. The READYMADE x Nike Blazer Mid came in two colorways: White Camo (CZ3589-100) and Black Camo (CZ3589-001). The resale value for this sneaker often sells for $400 or more, depending on size and colorway.