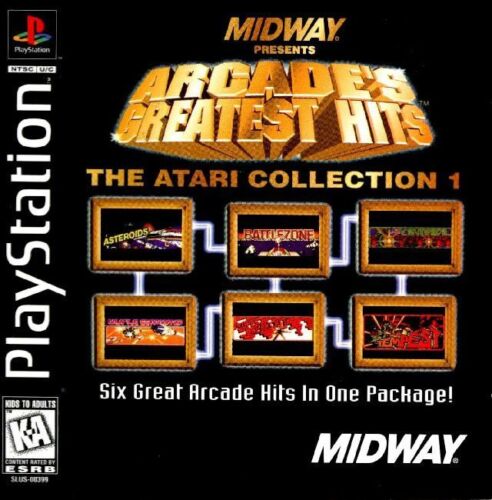 Product Information
Are you tired of combos, adventure quests, fatalities, hidden worlds and thick instruction manuals? Want a blast from the past? Try Midway Presents: Arcade's Greatest Hits/The Atari Collection 1 for the PlayStation, featuring six of Atari's most popular coin-op games from the late 1970s and early 1980s. Play Asteroids, Battlezone, Centipede, Missile Command, Super Breakout and Tempest.<br><br>Asteroids puts you in a triangular spaceship surrounded by floating asteroids. Your ship rotates and thrusts and is equipped with an endless supply of ammo to avoid collision with the space rocks while blasting them into smaller and smaller chunks until they disappear from the screen. Once you've cleared the screen, the action continues at a more difficult pace. From time to time, a large or small enemy flying saucer will appear on the screen.<br><br>Battlezone puts you on a mission to eliminate enemy tanks, missiles, and super tanks from an armored vehicle that can either left tread forward and reverse or right tread forward and reverse. A radar screen helps you sight and destroy the enemy. Background mountains and an assortment of geometric shapes situated on the battlefield act as obstacles.<br><br>Centipede, set in a magical forest filled with mushrooms, is a fixed-screen shooter in which you control a magic wand that maneuvers along the bottom quarter of the playfield to blast away at multi-segmented centipedes as they descend, creeping and crawling back and forth through the mushroom field. You'll also shoot jumping spiders, poisonous scorpions and frenetic fleas. Clear a centipede from the field and another takes its place, always beginning its descent from the top of the screen.<br><br>In Missile Command your job is nothing less than saving the world from nuclear annihilation with a limited allotment of anti-ballistic missiles. Protect six cities and three ground-based artillery bases as missiles rain from above. Bomb-dropping orbiters and delta-wing aircraft also make an occasionally appearance in the terror-filled skies. Maneuver your gun sight around the screen and fire from one of your artillery bases. Once you have warded off an attack, another wave begins.<br><br>Super Breakout has you controlling a Pong-like paddle that moves horizontally along the bottom of the playfield. Clear the screen by rebounding a bouncing ball off the paddle into horizontally built walls of bricks near the upper portion of the playfield. Hit a brick and it disappears.<br><br>In Tempest you maneuver a claw-shaped outer space vehicle that perches and crawls around the outer edge lanes of a series of ninety-eight tube-like constructs in the form of circles, rectangles, triangles and other geometric shapes. As you whiz around each tube, you must shoot at Flippers, Tankers, Spikers, Fuseballs and Pulsars moving and crawling toward you ship. In a fix? Employ your Super Zapper to destroy all enemies in sight.<br><br>The visuals in Asteroids, Battlezone and Tempest are composed of vector (line-drawn) graphics, just like their arcade counterparts. Except for Battlezone, all games in this compilation allow for two-player, alternating play. Battlezone, Tempest and Super Breakout support dual analog control, and you can use the optional mouse to play Centipede, Missile Command, Super Breakout and Tempest. This package also includes a documentary featuring interviews with original Atari programmers and designers.
Product Identifiers
Publisher
Midway Sports Home Entertainment
UPC
0031719269693
eBay Product ID (ePID)
9015
Product Key Features
Platform
Sony PlayStation 1
Release Year
1996
Game Name
Arcade's Greatest Hits: the Atari Collection 1
Genre
Compilation
Additional Product Features
ESRB Descriptor
Mild Animated Violence
ESRB Rating
E-Everyone
Game Name Special Features
Six classic arcade titles on one disc Includes Missile Command, Asteroids, and Tempest View a documentary about the history of these classic games
Control Elements
Gamepad/Joystick, Mouse
Number of Players
1-2
Location
USA
Seller assumes all responsibility for this listing.

Harder than I remember

I had this exact game back in the PS1 days and played it all the time. I bought it again so that I could play it with my 8 year old son on his PS3. It's harder than I remember, but most likely because I'm rusty and old. Still love Super Break Out, Centipede, Asteroids, etc... I would love it if they put out an up-to-date version of those old Atari arcade games.

I have had this game before, but my home was broken into about 15 years ago and I lost it all, trying to buy it all back now that I can afford it again. This game includes games like asteroids Battlezone Tempest Centipede and other games, it can be found on ebay for little to nothing because it is for and older gaming system the ps1, I like this game, brings me back to my days of highschool and college, when I didn't have a lot back then, but for a quarter I could go to the arcade and have a blast, I didn't have the net back then, no one did, or a cell phone, or a lot of money, but some days as I set here in my big fine home, with the alarm system on, and 12 ft fence, I wish I was back making pizzas driving and older car, and going to the arcade and just hanging out having fun.

I bought this because those were my favorite Atari games and I miss them. I don't understand today's new games--they're too complicated for me. My son and I play against each other and we have a great time. Although, I'm going to have to find a different controller because I liked the old Atari joystick and paddle controllers. Does Playstation make anything like that? The standard PS controller doesn't work with my 39 year-old hand-eye coordination!

I like most of the retro games in this videogame, it plays good, and I don't have to spend any quarters to play the games, there are a few games on here that I have never played in the arcade, but I will get to them eventually. The games plays just like in the arcades of old. It was a great price for the 20+ games, and I am glad I purchased it.

Great old cds, love the bundle, with a great price.