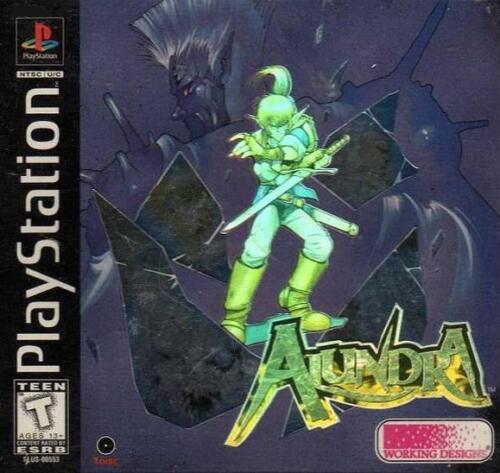 Report this itemopens in a new window or tab
eBay item number:
274921816648
Seller assumes all responsibility for this listing.

Product Information
In Alundra players assume the role of a young adventurer named Alundra -- a Dreamwalker -- with the ability to peer into other's dreams and wake them from nightmares. After crashing on the shore of a small island town, Alundra sees trouble lurking in the townspeople and the surrounding environments. It turns out that after hundreds of years of imprisonment by powerful wizards, a horrible entity named Melzas has awoken and threatens humanity. The foul denizen attacks people while they're sleeping by altering dreamscapes and locking them in an infinite nightmare of terror to die.<br><br>Developed by the same team who created Landstalker for the 16-bit Sega Genesis, Alundra is also an action-RPG with an isometric viewpoint. The action takes place around the small village with various surrounding areas: caves, temples, forests, and mountains. Each completed task leads Alundra to his next mission -- entering another person's dream to save them. Sometimes that person is chasing a loved one they never catch, or is surrounded by demons. Players will need to acquire items, push and pull blocks to solve puzzles, and hop between platforms to navigate the world.
Product Identifiers
Publisher
Working Designs
MPN
SLUS-00553
UPC
0735366005535
eBay Product ID (ePID)
1039
Product Key Features
Platform
Sony PlayStation 1
Release Year
1997
Game Name
Alundra
Genre
Role Playing
Additional Product Features
ESRB Descriptor
Comic Mischief, Mild Animated Violence, Violence
ESRB Rating
T-Teen
Game Name Special Features
Lead Alundra on a quest to save a village from a great evil Explore dungeons, search for items, and solve puzzles Enter the dreams of others and battle demons
Control Elements
Gamepad/Joystick
Number of Players
1
Location
USA
Seller assumes all responsibility for this listing.

Payment methods
Cash On Pickup
Special financing available
Select PayPal Credit at checkout to have the option to pay over time.
Qualifying purchases could enjoy No Interest if paid in full in 6 months on purchases of $99 or more. Other offers may also be available.
Interest will be charged to your account from the purchase date if the balance is not paid in full within 6 months. Minimum monthly payments are required. Subject to credit approval. See terms- for PayPal Credit, opens in a new window or tab
The PayPal Credit account is issued by Synchrony Bank.

Working designs' cover arts are unlike no other playstation game; and for that sole reason, their games are top tier in my playstation 1 collection. Alundra is a timeless game with a dark storyline that is engaging, especially when it's paired with a beautiful soundtrack. The puzzles are also challenging and the pacing is well-designed. I thoroughly enjoyed playing this game and I love the overall aesthetic and theme. I definitely recommend purchasing Alundra if you can make time to play it and have the money. Also, if you can play Alundra on a crt tv with component input then you can truly appreciate the visuals to the fullest - especially the kickass intro!

Alundra - The Best "Zelda" for Playstation

The Legend of Zelda is a very big name in the industry and not because they have spent millions marketing the franchise, the games are among the best designed video games ever created. Every console maker wants to have a game with that quality, and Alundra is THAT game. The color palette is not as vivid as TLoZ's but the graphics are very well made and look really sharp. The gameplay is classic Zelda-like Adventure and is very well designed. The major difference with Zelda is the Jump button, which adds much depth to the gameplay and makes the game a bit more difficult because there are many puzzles that are more platform-driven than Zelda. The script is very good and the package is really good and quite different than the usual because the publisher, Working Designs, always made great efforts to stand out from the rest. Alundra is no less than a video game classic and is unfortunate that many people don't know this incredible action-adventure game. Its difficult but never impossible, you gonna have a really good time with this gem.

Never have I been so tested and challenged since the old Genesis adventure title, LandStalker. And Climax has made Alundra twice as hard, twice as challenging, and twice as good as its LandStalker counterpart. Play the part of Alundra, a young boy who possesses the power to venture through people's dreams. He's like one of those dream warrior chaps from Nightmare On Elm Street, but instead of fighting Freddy Krueger, Alundra instead faces difficult mazes, challenging puzzles, and nasty monsters. Maybe not the best analogy, but you get the picture. Not only does this game possess a really cool story, but it also has some great music and graphics that totally suit the game, like Wild Arms. Sure, it's no Final Fantasy VII, but Alundra has that classic, more traditional RPG feel that has literally faded away since the introduction of polygonal graphics. I'm not saying that evolution is bad, but I honestly miss these types of games. The game may look outdated, but Alundra does in fact possess a level of gameplay that doesn't appear much in today's role-playing games. I mean, am I the only one who's tired of turn-based RPG titles? Alundra shares the same gameplay elements found in the classic NES version of Zelda: A Link to the Past and, like I mentioned before, LandStalker. Staged in a pseudo-3D environment, Alundra builds on the basic fundamentals of those old console adventure titles and simply makes them better. With improved character animation, better level design and more puzzles, Climax has turned this fizzled genre into a game that most, if not all RPG fans will enjoy. Because of Alundra, I now own three busted controllers and have two holes in my wall -- I'm kidding. However, I will warn you that there are some levels in Alundra that were so dang difficult, I literally broke down and cried. And get this -- when you die, may it be by the hand of a skeleton or a slight miscalculation of a jump, you have to start all the way back at the last save point. When this happens, and you can bet it will, you can do one of two things. You can either give Climax the middle finger, or a thumbs up for making the game challenging. Hey, I gave them a thumbs up... most of the time. Besides my gaming integrity being slightly scarred by near impossible obstacles, and I use the word "near" really loosely, I do have to admit that this game is awesome. If you really enjoyed games like Ys, Zelda, and/or LandStalker, you'll especially dig Alundra.

Got a better condition copy than my previous copy of Resident Evil 3 Nemesis so I'm extremely happy about it. Got it at a good price also. Love this entry in the Resident Evil series.

Alundra is an RPG not unlike Zelda.

Alundra is an RPG not unlike Zelda. I was very impressed by the old school nature of this game. I also loved the packaging. It had a very nice booklet :) Here are the details. Gameplay: 9/10 Elements 9/10: This is your basic no encounter 2d RPG. Like Zelda, you run around, get items, talk to people, solve PUZZLES, etc. This game is VERY puzzle oriented. Which in my book just makes it a lot more enjoyable. And there is also a great deal of exploring to be done in this game. The enemies and battles you face are in real time per say, as you can see where an enemy is and if it's not a boss, you can try to run away or avoid it. I found myself often, chopping grass for like an hour for fun, just to get money. lol . Overall the combination of all these elements make for a deep game :) Controls 10/10:: The controls are great. I had no qualms about any of the controls. Difficulty 9/10: This game starts off at average difficulty. And head towards hard, on the puzzle side of it. While even the most difficult puzzles ARE doable given time, this may be a little too hard for the video game novice. Story 10/10 Maybe it's just me, but I loved the story. Not only is the story great, but there are little loop holes, between locations storywise. Meaning that when the game is constantly bombarding you with story, so you don't go on far without seeing more story!! And that makes for a great game :) Audio 4/10 There isn't much going on in the Audio department, so a 4/10 will suffice. Graphics 6/10 The graphics are great for old school. Yet a bit lacking in comparison to what is out there now. So because of that I have to give it a 6/10. Value 9/10 Value 9/10: All in all I would say this game is worth the buy. It's long, fun, and has a great story. What else do you want? Replayability: Not much replayability in this game as it is an standard RPG. Fun Factor 9/10 This game is a LOT of fun. From chopping grass, to solving puzzles, and chopping enemies, and handling bosses. It has a lot of content, and a great story. I have to give it a 9/10 for fun. Overall Rating 9/10 I hope this review helps someone :)