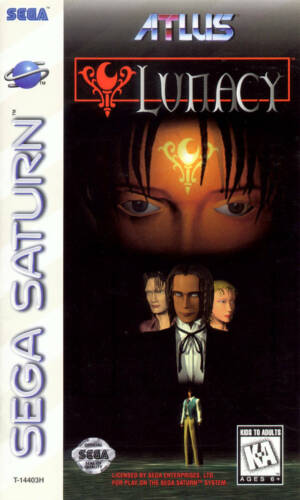 Product Information
This action video game titled Lunacy, released for Sega Saturn, takes place in two main locations like Misty Town and the City of Moons. That's the reason why the game is divided into two CDs. Although the game gives the illusion of freely in a 3D environment, in reality every action loads a cinematic sequence pre calculated as for example travel, collecting objects and talking to characters are pre-calculated. The allowed movements are limited to front, to the right, left, forward or backward and to examine different objects. All the game is played according to the Fred's prospect. Every important event is stored in its memory and can be reviewed later. The players can also save their progress at any time.
Product Identifiers
Publisher
Altus
UPC
0730865510030
eBay Product ID (ePID)
56248459
Product Key Features
Platform
Sega Saturn
Release Year
1997
Game Name
Lunacy
Genre
Action/Adventure, Adventure, Action/Adventure
Additional Product Features
ESRB Descriptor
Animated Violence
ESRB Rating
E-Everyone
Control Elements
Gamepad/Joystick
Number of Players
1
Location
USA
Seller assumes all responsibility for this listing.

Payment methods
Cash On Pickup
Special financing available
Select PayPal Credit at checkout to have the option to pay over time.
Qualifying purchases could enjoy No Interest if paid in full in 6 months on purchases of $99 or more. Other offers may also be available.
Interest will be charged to your account from the purchase date if the balance is not paid in full within 6 months. Minimum monthly payments are required. Subject to credit approval. See terms- for PayPal Credit, opens in a new window or tab
The PayPal Credit account is issued by Synchrony Bank.

Funny voice-acting/script, nice music, goofy time. Not worth the money.

Lunacy is an FMV adventure game. Usually that means you are in for an awful time (see: WARP's games, like D and Enemy Zero). However, Lunacy is actually quite playable and entertaining. The game bucks the trends of most FMV games with giving your character, the "infamous Fred" a real runner's pace. It's actually really funny watching him (or rather, the camera) gun it about town. Even funnier when the camera does some mad stunts like barreling backwards down a hallway, sprinting down a ladder, and jumping laterally backwards from said ladder - Fred has got skillz. The point being is that this fast movement gives the illusion of speed to the gameplay, and even though it is an illusion, it is so much better than D or Enemy Zero's tip-toeing through the environments. Another thing Lunacy has going for it is its utterly goofy script, with extremely wooden and bizarre delivery. The "infamous traveler" Fred sounds like a whiny goober, and you'll get used to hearing his pathetic exclamation "Oh, it's useless!" as you solve the game's obtuse puzzles. The real star is Lord Gordon, the self-proclaimed "master of dirty tricks," who won't let any "moon tricks" stop him from becoming king of Moon City. If you couldn't tell, I can't stop laughing at how stupid all of these characters are - in fact, one character spends the entire game calling you "stupid" or "loser", so he's naturally the most likable one in the game. For as much as I rag on the game, I am at least invested in what's going on, because it is so bizarre. The Town of Mists is so chock full of plot twists it makes Shu Takumi's Ghost Trick's sheer pile-up of coincidences in its final chapter seem like a low-tier M. Night Shyamalan movie. It's all good fun to show to friends, as they won't understand what's going on. If this all sounds positive, it is, in a backhanded-compliment sort of way. However, if I was judging this game solely by its presentation, it would get a great "cult-hit" mark. Unfortunately, like most FMV games, Lunacy has a lot more "video" than "game." For starters, the maps you navigate are extremely confusing. Both Misty Town and Moon City are full of twisting corridors and curving paths, and it is extremely easy to get lost, which compounds your aimless sprints down these various hallways. The latter is more obnoxious, since it contains teleportation to various parts of the map, and it is very hard to keep your bearings. Secondly, and most egregiously, the sequence of events are completely obtuse and non-obvious. You will have to consult a FAQ several times, because the game does not make it clear what to do. After cutscene X, examine a random flower in the flower shop (on the other side of town) to learn interesting fact Q, that allows your idiot of a character to piece together information you figured out a half-hour ago. It's irritating because you want to play the game, not look over your shoulder at a FAQ or map of the town to figure things out. Be prepared to save on the second disc, since the stakes are raised considerably, and puzzles are life-and-death matters! These puzzles are craftier and more mind-bending and satisfying, and the strange vistas and environments give the game a unique and interesting atmosphere. It only barely makes up for the monotony of running around, trying all your items on random spots of the game. Barely. If this were a $20.00 saturn game, it'd be easy to recommend. Go cheap or watch it on youtube!

Critics are going to hate but if you go in with an open mind, turn the lights down, and just get lost in the subtle, enchanting music and interestingly eerie vibe of this title you'll get much more enjoyment out of it. And you WILL get lost. I loved the voice acting and there are definitely some funny lines but over all it was a very interesting experience. Never beat it but I really enjoyed what I did get through. A real gem IMO.

This game shines because it is one of the most relaxing games I have ever played. Yes, it may be simple gameplay where you just move the character different directions and react to objects, but because of that fact, and because the graphics are so smooth and detailed, it causes you to just sit back and relax and enjoy the experience. I would say it is similar to Myst, but in a different perspective and story. Definitely check it out.

A classic FMV game with interesting characters and plot twists.

I bought this for a few reasons 1, its an ATLUS game and there usually very good at creating them. 2, its only availible on Sega Saturn making it rare considering how long the system lasted here in the US & Canada. 3, I like the type. Its basically like any other adventure game doing puzzles to finish the story in a first person perspective. The graphics great, and the FMV sequences are very nice. it looks and plays like a twisted variation of Myst but you'll be surprised at how little loading times there are, so low i really do not notice any when i play. the flow is great and the story very uniqe asside from it probably costing a fortune to buy i would suggest picking up a copy to any one interested in adventure games of this type. Just don't buy it expecting it to be the greatest game you've ever played because it is not.

Back to home pageReturn to top