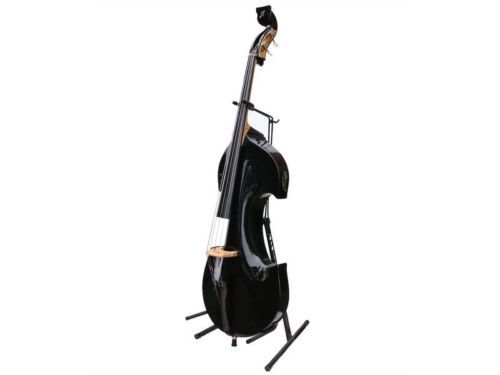 Get Groovy With Upright Basses

An upright bass, also known as the bass or double bass, is a stringed musical instrument that is played either by plucking its strings (pizzicato) or with a bow (arco). It is considered to be a member of the violin family, and it has the lowest pitch in that family. It is conventionally a member of an orchestras string section and is also used in musical genres such as jazz, bluegrass, and folk music.

How is an upright bass shaped?

Some scholars believe that the upright bass is descended from the viola da gamba, which originated in Europe during the 15th century, whereas others are of the opinion that the bass is more similar to the internal construction of instruments in the violin family rather than the viol family. The bass shares features with members of the violin family, such as a vertical bridge, a scroll, and a tailpiece. Like viols, though, the upright bass has a flat back and sloped shoulders. Basses can sound and look different from each other because the design has never been completely standardized.

What is an upright bass made of?

A bass will generally consist of several different kinds of wood. Maple is used to build the neck, back, and ribs. Spruce is used to construct the top. Bass fingerboards and tailpieces are made of ebony. There are also basses made of laminated plywood. Those basses are widely used in music conservatories and youth symphonies as well as in pop and folk music groups.

What are upright bass strings made from?

Historically, upright bass strings were made from gut, which is sheeps intestines. Steel has mostly replaced the use of gut. Bassists who are members of musical groups such as baroque ensembles and traditional blues bands may still use gut-stringed basses. There are also bass strings constructed of nylon. Lower strings are nylon-wrapped wire whereas higher strings are pure nylon.

What sizes of upright bass are there?

Most basses are 3/4-size basses, and many professional bassists use a 3/4 bass. Full size 4/4 basses are very rarely used or made. A player must have a larger than the average left hand in order to use a full-size bass. However, bass sizes vary considerably. The most common bass sizes and their total heights are:

What is an electric upright bass?

The electric upright bass (EUB) has a minimal, "skeleton" body, making it not as heavy and smaller than an acoustic bass. Electric upright basses are plugged into amplifiers and speakers, producing electrically amplified tones. It sounds somewhat different from an acoustic double bass because of its electric connectivity. Some EUBs have built-in volume controls and pickups, like on the bass guitar. Musicians position themselves to play the EUB like the double bass, either standing up or sitting on a stool. The EUB can also be used in the pizzicato style.

As the leaves begin to change, ring in theBack to School season by shopping for everything your kids or students need to start off the year right, from stationary to upright basses.