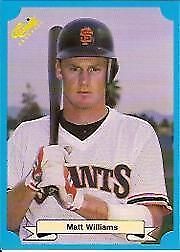 For a baseball fan, collecting and trading cards can be an enjoyable and rewarding hobby. As the name implies, sports trading cards can be flipped, meaning if you had two Barry Bonds rookie cards, you could arrange a swap with someone who has two Buster Posey rookie cards. Fans of the San Francisco Giants can choose from any number of vintage trading cards that recapture memories of the teams most important games and its many outstanding players.

A Giants trading card must have an authentic player signature to qualify as memorabilia. If you later manage to get Bonds to sign a card commemorating one of his most famous games on August 4, 2007, you would have a piece of Giants memorabilia that collectors may be interested in obtaining. An authenticated signature is what makes the card rare and qualifies it as memorabilia.

Trading cards from the 2010 season, the 2014 season, and the 2016 season, when San Francisco won the World Series, are big hits with collectors. The cards for the 2010 team draw massive attention, though, because it was the first Giants squad to win the series since they moved from New York to San Francisco in 1963 as well as the year Madison Bumgarner won the World Series MVP award.

Which San Francisco Giants stars are on prized cards?

One famous example is Willie Mays. There is also Mays’ godson, Barry Bonds, whose father, Bobby Bonds, was a teammate of Mays. The Bonds are baseballs most accomplished father-son combination, with places in the Hall of Fame. Juan Marichal and Gaylord Perry, greats of the game who also called San Francisco home, are two additional Giants in the Hall of Fame who appear on collected cards. Their trading cards often draw crowds at baseball card shows.

What happens at trading card shows?

Content provided for informational purposes only. eBay is not affiliated with or endorsed by the San Francisco Giants.