Save on Gillette Men's Razor Blades 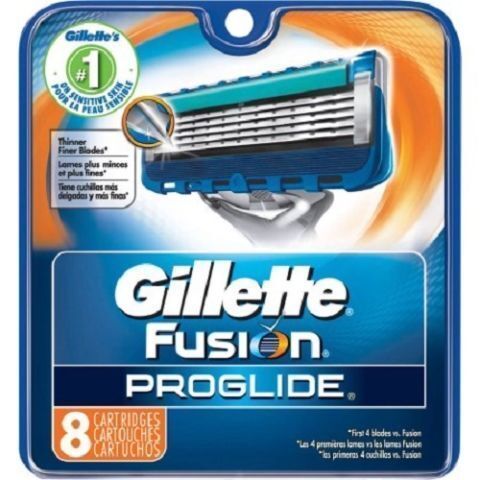 Gillette was founded in 1901 in Boston as a safety razor manufacturer and expanded to offer mens and womens razor blades, trimmers, and other personal care products. Now a brand of Procter & Gamble, the company makes razor blades for men and women. Products for men include Good News disposable double-blade shavers, Sensor 3, Mach 3, stylers and trimmers, and the Gillette Fusion series.

What five-blade mens razors does the brand sell?

Does Gillette make a three-blade razor for men?

What other disposable products does Gillette make?

Several types of disposable two-, three-, and five-blade razors are available, including Sensor5 and Sensor3 disposables, which have lubrication included. CustomPlus3 are soothing three-blade razors that have comfort lubrastrips for sensitive skin. Regular Mach3 and sensitive Mach razors come in packages of three and six. Sensor2 Plus, pivoting, and fixed blade models come in packs of five and 12. The Sensor Simple3 blade disposable razor has a lubrastrip and is intended to provide seven clean shaves per razor.

Gillette makes an all-purpose everyday use styler that trims, shaves, and edges. The model is waterproof and includes Braun-trimming technology with three combs for different beard and mustache styling and trimming. The product fits Fusion5 blade refills for custom shaving needs.

For all that hes done for you and the family, thank dad thisFathers Day and shop for his favorites in Gillette razor blades and more.

Content provided for informational purposes only. eBay is not affiliated with or endorsed by Gillette.