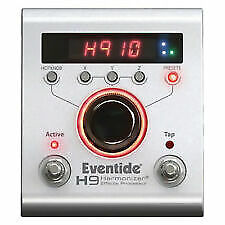 Create Sounds with the Eventide Harmonizer

The Eventide Harmonizer, available new or used in a wide range of prices on eBay, is a useful addition to a guitarists pedalboard. It serves as a supplemental effect to any instrument you pair it with. From snares to guitars to vocals, the Eventide Harmonizer is both distinctive and diverse in its performance.

Features of the Eventide harmonizer

Many features help the Eventide harmonizer create effects for multiple instruments. These include:

The MIDI mapping feature allows artists to control and change the pitch and harmonization in real time, making it useful to duplicate certain sounds in live settings. The envelope follower lets you manipulate pitches, whether to switch to a certain pitch or vary it multiple times within a certain time frame. This creates a unique sound effect that can be useful for a multitude of musical settings. The dual unit that comes with the Eventide harmonizer lets you take an audio signal, duplicate it, and then pitch it differently, so it contrasts with the initial sound to create harmony. The pitch-shifting effect can heighten or lessen an audio signal to suit the context of the musical setting.

What are some uses for the Eventide harmonizer?

You can use the harmonizer as a delay/reverb on an instrument such as a drum in order to obtain more echo in the sound. It can also be used as a plug-in during a mixing section, where you can apply a recorded audio signal and "re-amp" it with any of the effects that the harmonizer is capable of producing. You can make the Eventide harmonizer part of an effects rig in a live setting in order to use its effects during a performance.

Many guitar players use the harmonizer in a rock setting to create a guitar harmony effect for leads or to add single-note passages to impart a harmonic layer to the section they are playing. The harmonizer can also be applied to a synth in order to manipulate the initial output signal. This effect is well-suited for effects-heavy styles such as electronic music and progressive rock. The reverb/delay effects that can used on instruments such as guitar and drums can create simple layers that are often used in pop music as well.

Content provided for informational purposes only. eBay is not affiliated with or endorsed by Eventide.