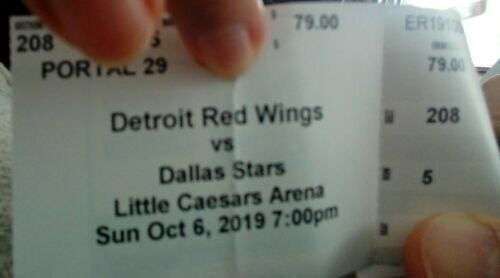 Snag Some Red Wings Tickets to See Action on the Ice

The Detroit Red Wings play 41 home games each hockey season. The season runs from October through April. The newly constructed Little Caesars Arena in Detroit has many different seating options for fans who want to watch a hockey game.

What are some facts about Little Caesars Arena?

Little Caesars Arena was opened in time for the 2017-2018 hockey season. The building replaced the old Joe Louis Arena, where the Red Wings had played since 1979. Little Caesars Arena seats approximately 19,500 for hockey. The facility is part of a large district consisting of 50 blocks where fans can watch a game and enjoy the entertainment before or after the game. The arena is separate from the offices and the box office, and the arena floor is 40 feet below the street level. There are three primary seating levels at Little Caesars Arena. In addition, there are club seats as well as other unique seating options.

Seating types available at the arena

Little Caesars Arena has many different types of seating options for fans. Here are some of the seating choices that are available to fans.

Where is the arena located?

Little Caesars Arena is located on Woodward Avenue in the Midtown Detroit neighborhood. The venue is located right off of Interstate 75.

Who do the Detroit Red Wings play?

What amenities are there at Little Caesars Arena?

There are four restaurants located inside of the venue that are open not only on game days, but also on other days as well. One of the more well-known eateries in the venue is Kid Rocku001as Made in Detroit. The venue also features many different Detroit-themed food options. Many of the amenities in the venue can be accessed through an app.

Content provided for informational purposes only. eBay is not affiliated with or endorsed by the Detroit Red Wings.