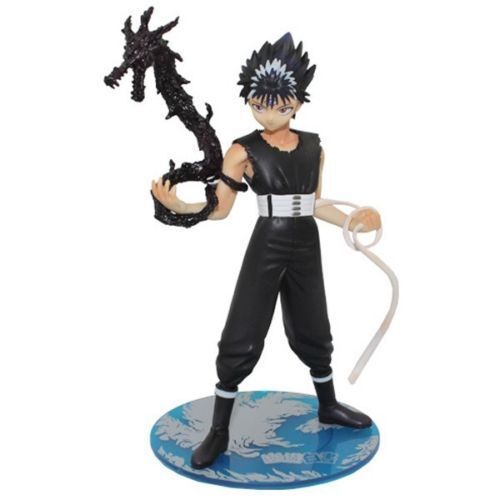 Yu Yu Hakusho is a manga written and drawn by mangaka Yoshihiro Togashi, which follows the story of Yusuke Urameshi, a recently deceased Japanese delinquent who becomes a spirit detective to regain his life. Yusuke takes on demons and ghosts to protect the living on behalf of the rulers of the Spirit World. Like with most manga franchises, an anime adaption was made, with many collectibles made to further capitalize on its success, and with a series as old as Yu Yu Hakusho, theres an equally vast amount of merchandise that has been made.

What kind of collectibles have been made for Yu Yu Hakusho?

In addition to the logical release of DVD, VHS, and Blu-Ray sets of the show itself, Yu Yu Hakusho has made numerous types of collectibles since the first episode aired in 1992. To name just a few of the items you can find from the series, there are toys and action figures, key chains, clothing, statues and figures, lanyards, trading cards, hand fans and other novelties, original animation cells and manga manuscripts. Some of the collectibles will display the characters, varying from Kurama to Koenma, and the Spirit Detective himself, Yusuke.

Who are some of the characters who have collectibles?

Yu Yu Hakusho has a wide cast of characters, in addition to the protagonist Yusuke, many of whom have had different types of collectibles made of them over the years. When it comes to Yusuke, different toys, clothes, posters, keychains and other items all bear his likeness and signature pompadour hairstyle. Supporting characters like Kuwabara, Hiei, Kurama, Koenma, and Botan also have various forms of merchandise. Even villains like Toguro and Sensui have their fair share of collectibles.

Are there any differences between Japanese and English collectibles?

Certain differences do exist between different languages releases for Yu Yu Hakusho collectibles. In addition to things like DVDs and packaging being in their respective dialects, certain collectibles, like convention- or contest-exclusive jewelry or pins, were only released in certain countries.

Was the original soundtrack for the anime ever released?

Yes, Yu Yu Hakushos soundtrack was released periodically throughout the shows run, with new albums to coincide with new segments of the story and the music used in them. The opening and ending theme songs were also released, both as singles and as part of larger albums. Several image songs, sung by a characters voice actor from the characters perspective, were also made for the series.

Content provided for informational purposes only. eBay is not affiliated with or endorsed by Yu Yu Hakusho.