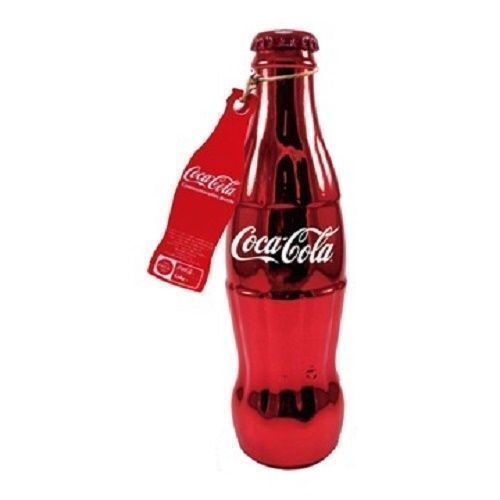 With its classic and cool red and white color scheme, its not at all unusual that so many people, from decorators to historians, collect Coca-Cola brand paraphernalia. It touches on a popular aesthetic for many people and even transitions directly into festive decor, whether youre a fan of the classic Santa-edition releases, the polar bears, or even just the standard Coke insignia.

When John Pemberton invented Coca-Cola, he hired Asa Griggs Candler as the companys first president. Candler believed there would be no interest in buying this carbonated soft drink brand in a bottle, so when he was approached, he declined offers to sell the product that way. It was not until Joseph Biedenharn started bottling the product for people to take to summer picnics and sporting events that Pemberton and Candler became convinced they had made a mistake, and they immediately sold the bottling rights to Benjamin Thomas and Joseph Whitehead.

The first Coke was sold in Hutchinson-style glass bottles that were embossed with the words "Biedenharn Candy Company, Vicksburg, Miss." on the bottom of the bottle. On its side were the words "Coca-Cola," in script. A few early bottles, however, do not have the manufacturers name on them.These aqua-green Coca-Cola bottles each have a unique metal stopper allowing users to push down on the middle to pour out the drink. When pushed, the lid made a unique popping sound, giving soda pop its unique name.

The brand used five different colors of Coca-Cola in its early days, including:

What Is a Root Coke Bottle?

In 1909, Coca-Cola moved away from using Hutchison-style bottles and started using containers made by Root Glass of Terre Haute, Indiana. The earliest of these have the number 9 embossed on their heel along with the initials “R.G.CO”. Later, those manufactured in Terre Haute would bear different numbers - the manufacturer gave each mold a new number.

Collectors can look for the word Coca-Cola embossed on their side with the first C having a very long tail. After the mold numbers became double-digits, the embossed heel initials were changed to ROOT, and still, later, a city code was added with some having paper labels.Coke was produced in over 1,450 cities in the United States. Cities would get their own embossed city code on the bottles heel when they were added. Those being sent to Florida and Alabama had the word "trademark" on their base, while those intended for other states did not have the “trademark” word on them.

In the summer of 2014, Coke started making plastic bottles with personalized labels. In the first three years of the program, Coke printed more than 250 names each year, and they started adding last names to some units during 2017. People had the option of ordering "Share a Coke" units with their name on it. They could also attend special events where they would receive aluminum cans with their names on them.

Content provided for informational purposes only. eBay is not affiliated with or endorsed by Coca-Cola.