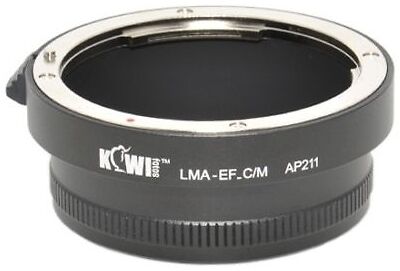 Cameras typically have lenses that are not interchangeable between brands. In 2008, this changed with the Micro Four Thirds system which was developed to make lenses interchangeable between brands. However, other kinds of lenses wont always fit on the Micro Four Thirds lens as this camera is a different size. So, Canon has fitting adapters made specifically for these types of lenses.

Are all Micro Four Thirds lenses compatible with each other?

How does an adapter work?

They are simply a fitted, threaded ring which attaches an incompatible lens to your camera body. Its often used with older lenses but can be used with new lenses as well. An adapter often does not allow communication between the camera and the lens. Because of this, you have to focus manually. There are some adapters that allow you to adjust the aperture using the adapter. Some of them, however, also come with an electrical attachment so you can use your autofocus and other camera features with the adapted lens.

What are some of the features of an adapter?

Although the features vary by adapter, here are some of the features that can be found on a Canon EOS camera lens fitting adapter for Micro Four Thirds cameras: